I had the pleasure of attending Wikimedia+Libraries International Convention 2022 in Maynooth just outside of Dublin on July 23-24. I got roped into the convention through librarian extraordinaire Laurie Bridges, and they suggested I join the scholarship committee to help assess applications from scholarship applicants. It was interesting work and I noticed it was quite similar to assessing scholarship applications for my student organisation V-Dala Nation where I once served as scholarship secretary (although in this case much less financial data and less extensive spread sheets – thankfully!) 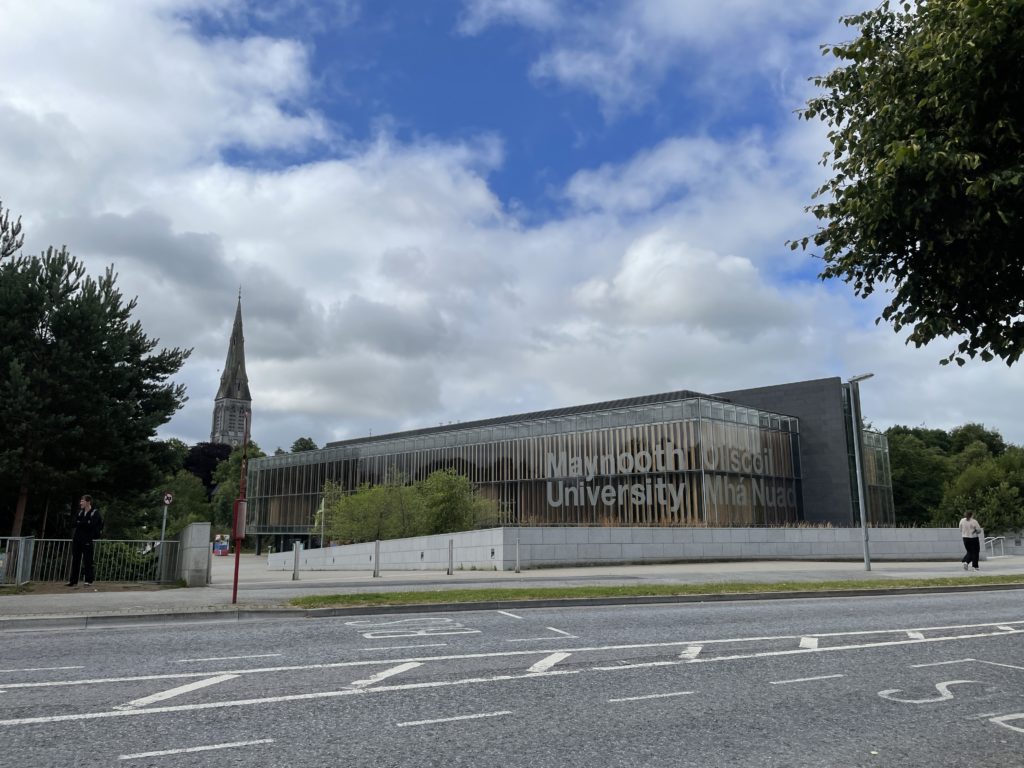 The setting for the convention was the beautiful library of Maynooth University. I didn’t take a lot of pictures of the library, but it was a beautiful, bright building with great spaces for studying, teaching. and meeting people and I could really picture myself as a student enjoying spending time at the library.

The conference started of with an excellent keynote by Dr Nkem Osuigwe, one of my library role models. Their talk was titled Wikimedia through the Prisms of Critical Librarianship, and I really appreciated the critical take on librarianship which I feel is sometimes lacking in the Nordic LIS field. According to Osuigwe, critical theory

examines what exists in society/particular field and,
challenges assumptions and practices,
asks questions about historical, economic, social and cultural issues underpinning practice,
interrogates whose perspective is being heard/seen and promoted in existing structures and systems,
views how the frameworks and standards of existing structures and systems came to be, and
configures in social justice

and it’s employed to

– explain what is wrong with current realities of praxis
– identify those who can think through critically to suggest and drive change, and
– provide practical pathways for social transformation as well as more criticism.

These extracts are verbatim from a couple of slides in Osuigwe’s presentation and I find them very relevant. For me, being critical of something is not negative criticism (which I think it’s often interpreted as!) but rather something that drives positive change in an organisation. The last four years I’ve worked at a university library and I think there has been a shift towards being an isolate service provider rather than being an intellectually driven integrated part of the university driving change through its activities. It’s both the activities the library does as much as the general mindset that cause this. For example, the shift to open science (a value libraries typically advocate) is hindered by bureaucratic obstacles and complacency. It sometimes seems as critical theory is left at the door when one moves from library education to the library profession. I have never been able to accept this since I believe critical thinking is a skill you acquire for life, not for education. This has put me in a tight spot several times in my professional career!

As you can see, Osuigwe’s talk helped me critically assess my own professional situation, which is very valuable to me. But of course the talk had a broader impact as well and I appreciate how they placed Wikimedia as an emancipatory tool to support fundamental human rights, such as freedom of expression and access to information. According to Osuigwe (and I agree!) ”a core aspect of critical librarianship is that librarians are activists by calling as they defend intellectual freedom and promote cultural resistance irrespective of prevailing political, economic and social attitudes that promote the ’caging of knowledge’.” They also mentioned that the default setting of a library is open, and this is worth mentioning because I think there is an idea that libraries are neutral, which is all good in one sense, but what happens when neutral is in conflict with open?

Libraries, politics and activism is something I briefly mention in this article in Biblioteksbladet (in Swedish), regarding climate action in libraries. The shortened quote makes me sound very harsh, but I do think there is a certain anxiety in Swedish libraries regarding anything that might be considered ”political”. In this column on Wikipedia in Bibliotekbladet (in Swedish) I theorise that our perceptions of power is at the core of how Swedish librarians act and think about Wikimedia, activism and other issues – there seems to be preference for hierarchical structures rather than a flat power distribution. I wonder if responsibility is at the core of this (i.e. when do want to assume responsibility, and when do we prefer to be indifferent and unconcerned) and if it is connected to the move from critical librarianship in library education to the neutral public servant in the library profession.

Osuigwe also underlined how Wikimedia encourages the plurality of voices, for instance through linguistic availability, and this theme was also something that came up in Michael David Miller’s presentation in the session A Booktalk: Wikipedia and Academic Libraries, A Global Project (presentation available here) where they talked about the LGBTQ+ content of francophone Wikipedia and how they had discovered it wasn’t really representative of the francophone communities, but mainly consisted of articles on events in the United States (see image from presentation below).

This highlights that even though translation of articles about important people and events are prevalent, the Wikipedia content might not be representative of the community that is reading the encyclopædia and this is an issue that must be dealt with, since it creates a sense of invisibility. As Miller quoted Kelly Doyle:

“The cultural capital of Wikipedia is such that existence within it denotes a level of power and importance. The phenomenon of considering something or someone truly significant or insignificant, through its presence or absence on Wikipedia, can be a damaging one.

Or in their own words: Ultimately, I want to exist. Of course a large part of the presentation was focused on how they had attempted to solve this issue: McGill University Library (where Miller works) had in partnership with Bibliothèque du Centre communautaire LGBTQ+ de Montréal and the Café des savoirs libre organised LGBTQ+ contribution events, which had resulted in new articles being created on historical LGBTQ+ events and spaces in Montréal, Montréal drag queens Rita Baga and Barbada de Barbades, and queer Quebecois authors Kevin Lambert and Antoine Charbonneau-Demers.

Miller’s presentation was very inspiring and it gave me the idea to try to organise a similar editing event focusing on LGBTQ+ articles in Swedish Finland, perhaps in collaboration with the organisation Projekt Fredrika r.f., which aims to increase access to information about Swedish Finland on Wikipedia (mainly on Swedish Wikipedia, but also in other languages). We’ll see how that goes! Anyway, if you want to read more about Miller’s (and other cool people’s) projects the book Wikipedia and Academic Libraries can be found here. 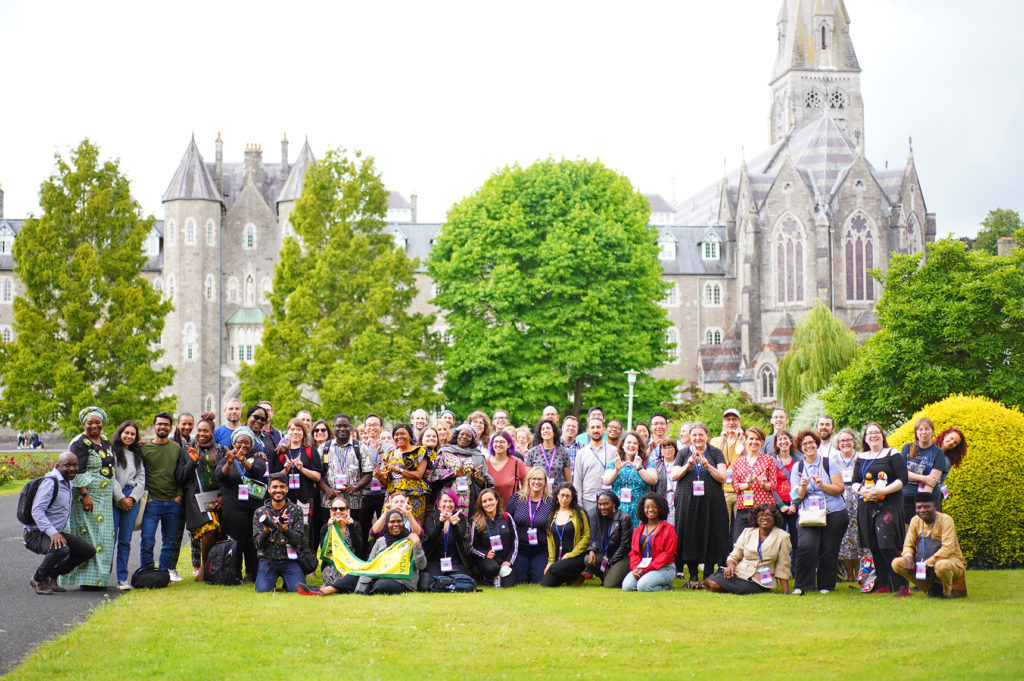 There so many more things to mention from WikiLibCon (so many great people! so many awesome ideas! and I chaired a session for the first time in my life!) so maybe there’ll be a part two to this post, we’ll see! In the meantime, you can check out my tweet feed for those days which lists the highlights as they happened!