Whenever I’ve heard Lancaster I’ve thought about Safe Warm Lancashire Home. This all changed the past summer when I went to the LIBER conference in Odense to give a presentation on cultural heritage hackathons and met Andrew Barker, university librarian at Lancaster University, who spoke about enhancing digital discoverability of special collections in the same conference session. The thing that really got my attention in their presentation was when Andrew presented Lancaster University as small enough to innovate and build community, putting them in a great position to explore new practices – ”Through disruptive innovation, we will build lasting change” I quoted in my tweet from the event (here are some of my other LIBER tweets, in case anyone’s interested).  Being ”small enough” means the university is not so big that any innovation gets immediately drowned in bureaucracy and conflicting interests, and still not so small that the organisation has too few resources to be able to innovate. It seems to me to be a sweet spot for library innovation, and the approach (disruptive innovation! lasting change!) really speaks to me. I would’ve applied for a job on the spot if I wasn’t already so pleased with where I am right now (and also because of Brexit).

As I had already planned to spend a few days in Manchester after my conference marathon in Ireland I asked Andrew if I could stop by for a visit in early August and to my utter delight he said yes, so on August 3 I took the northbound from Oxford Road towards Windermere, passing old cotton mills and the stations of Wigan and Preston before arriving in Lancaster, a city built of yellowy gray stones rather than the Mancunian red brick buildings I had just left. I walked into town and switched to a city bus taking me to the campus of Lancaster University, situated south of the city centre and built in the 1960s. The buses normally stop in the Underpass (oh stop it with the Morrissey references!) which would immediately take you to Alexandra Square, the university’s main plaza, but during my visit there were some Underpass and road closures around campus (makes sense do to the traffic work during the summer holidays) so I arrived at the library gates from another direction, after having stealthily followed some other bus passengers who didn’t seem as lost as I did, hehe. 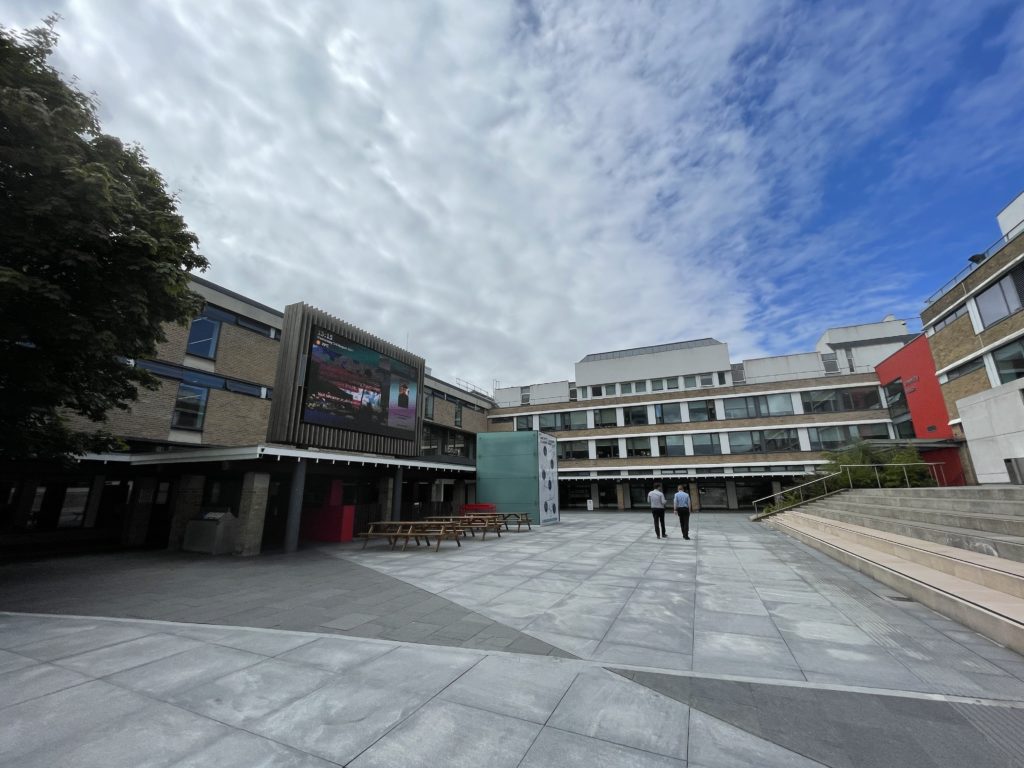 Alexandra Square at the centre of Lancaster University. Library entrance to the left in the inner corner.

Because of the summer holidays a lot of my pictures will look quite empty. However, walking around the campus it was really easy to imagine how vibrant and welcoming it would be during the year, buzzing with students and staff on their way to lectures, people, and places, enjoying their coffee and their discussions in one of the campus cafés (I had one of the best coffees I’ve ever had when I was there so the coffee really is worth mentioning – that was some proper intellectual fuel!)

I entered the library and was welcomed by Andrew who gave me a splendid tour. The library is still located in the same place as when it was opened by Philip Larkin in January 1967, and it has since been extended twice, I think, with the most recent extension being opened in 2021. If you don’t know what you’re looking for, these extensions are quite hard to notice in the library. The spaces flow seamlessly into one another, very clearly giving the impression of one library (rather than spaces being divided into the old part and the new part, which is quite common in libraries with extensions, cf. Carolina Rediviva and Turku City Library). 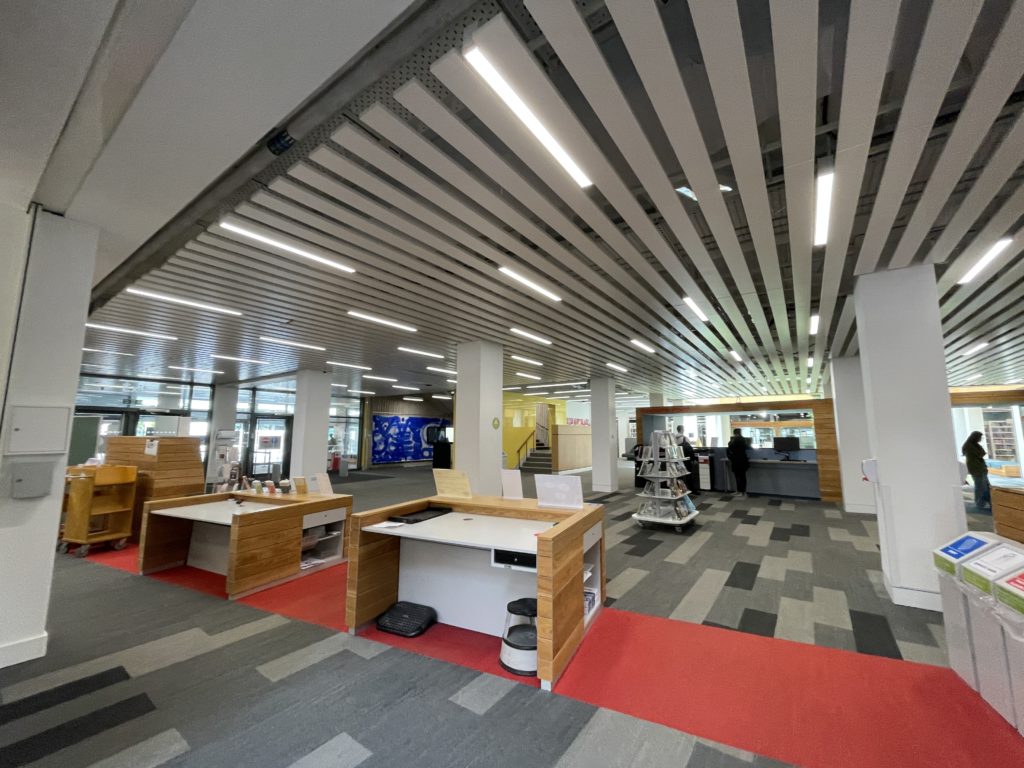 Library entrance floor, from behind the information desks. Main entrance from Alexandra Square to the left. 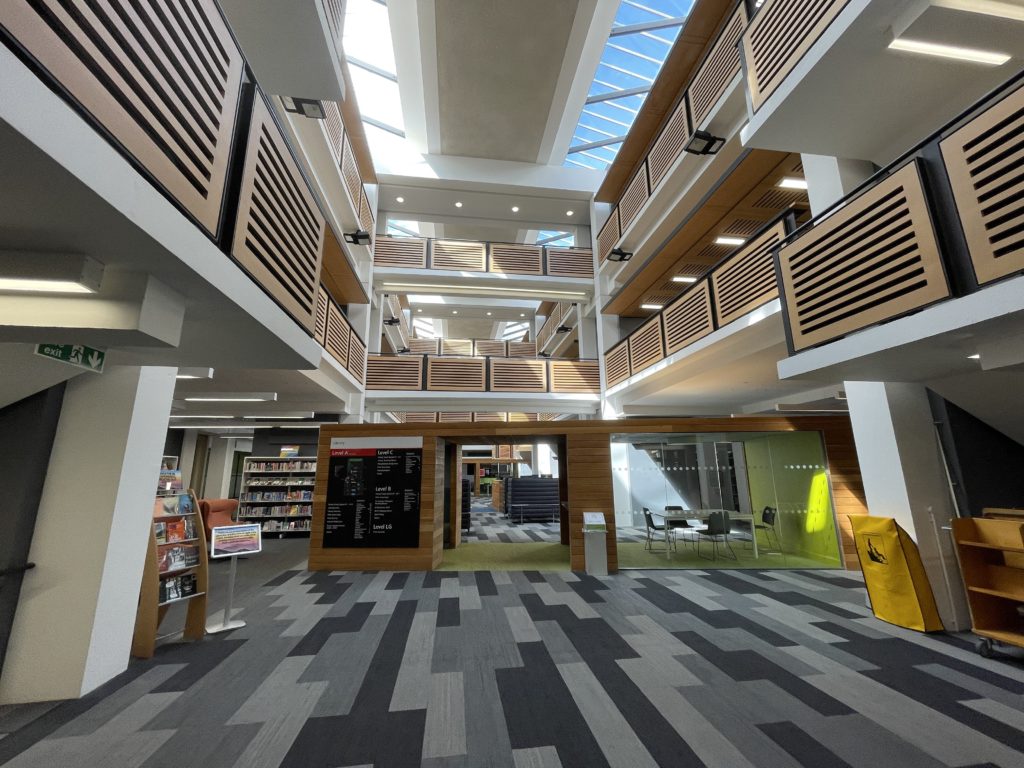 Library entrance floor, view from information desks – same place as the picture above but after a 180° turn.

In the newest extension, which is built to reflect the new vision of the library, there are 450 new study spaces (that’s a lot! as a comparison reading room A at Carolina Rediviva has 82 study spaces). The spaces are divided into different areas, taking into account sound levels, types of furniture, open spaces and smaller nooks, computer equipment… all to cater to different needs and wants of the library users. This is obviously quite common when building or remodeling library spaces, but nevertheless exciting to see because of the level of ambition and the success of it in the Lancaster library. I was overwhelmed by a sudden need to sit down and study in at least five spaces we passed because they looked so inviting and pleasant, it was like balm for the mind.

All floors of the building had been gifted with green walls. They’re described in the press release as ”[l]iving walls of expertly selected, glossy, vibrant plants, intermittent trickling watering systems and an array of tastefully chosen, stylish furniture all add to the calm, relaxing environment” and I think that sums it up quite well. Why we don’t make these everywhere? It seems like the kind of thing that could be easily incorporated into older buildings as well? I felt like Alice in Wonderland when I took the spray bottle and followed the ”please mist me” instruction. I’m sure it was more therapeutic for me than the plants – I just had to take a five minute break in writing this to reminisce about this moment. 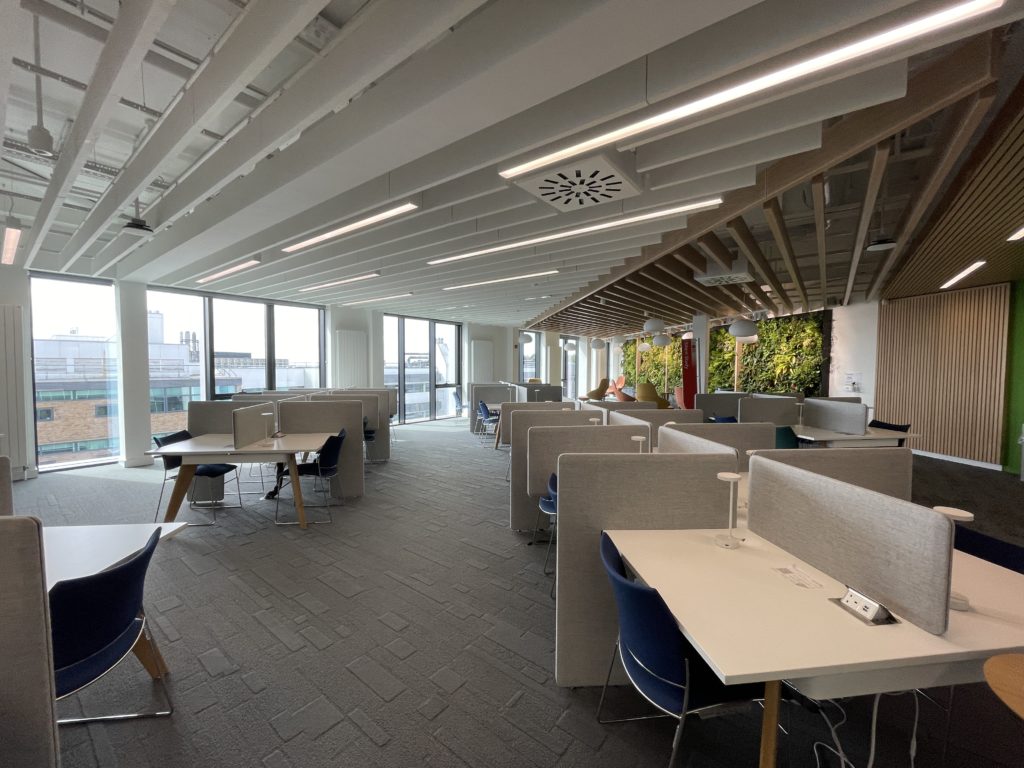 A green library wall, and different types of study spaces in the same place. 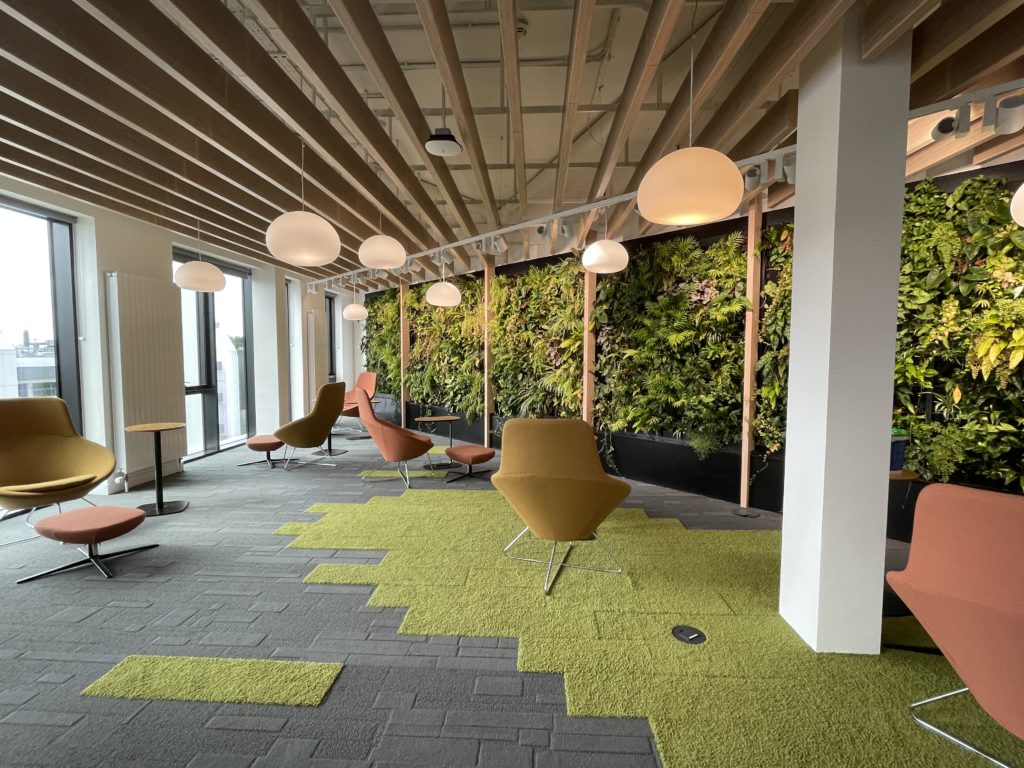 Closer to the same green library wall, and some grass carpet (it’s not really grass). 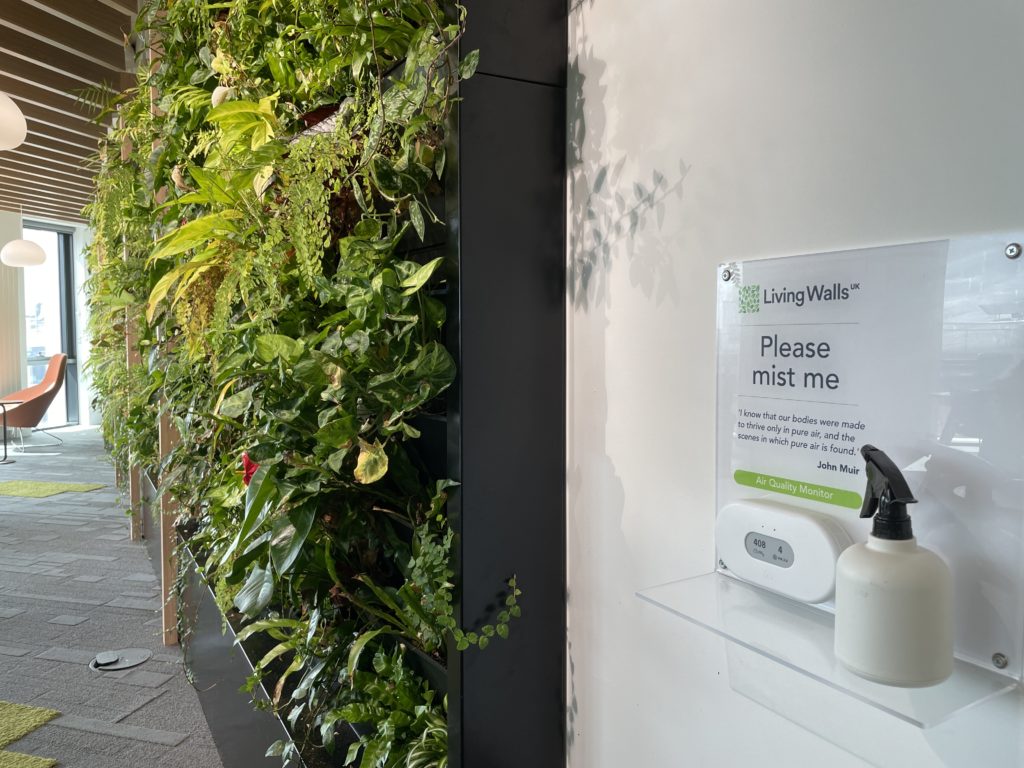 A green library wall up close. ”Please mist me”! 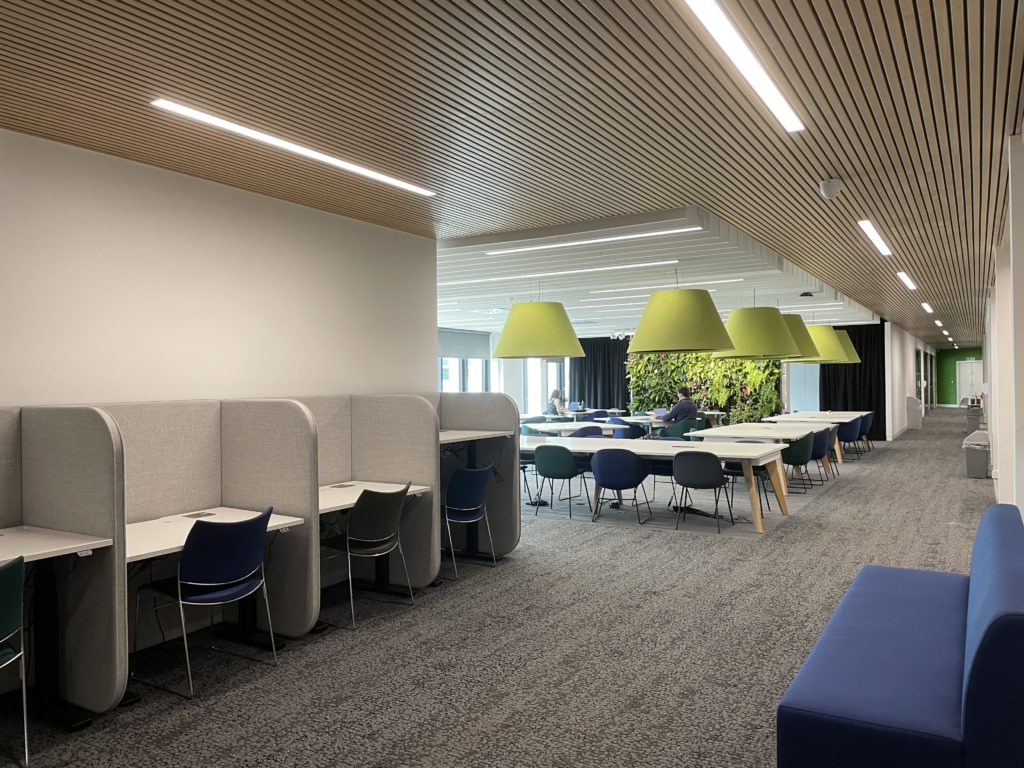 Another green wall, situated on another floor. Choose your jungle!

While on the topic of green in the library, I also got to meet the library tree Norma! The tree was named through a vote where 41,5 % of the 1330 votes were cast on Norma (I’ll just assume Tree McTreeface was a close second).  The tree grows in an inside courtyard which is also a space for events in the library (such as the university librarian DJ’ing to welcome new students or library festivals!). Since the study spaces on the floors above this courtyard are silent reading spaces there has to be a careful balance between events and study spaces so as not to disrupt too much. However, there is quite a large amount of silent study spaces elsewhere in the library, so when events do take place it’s quite easy to temporarily redirect users in need of quiet spaces to other parts of the library. 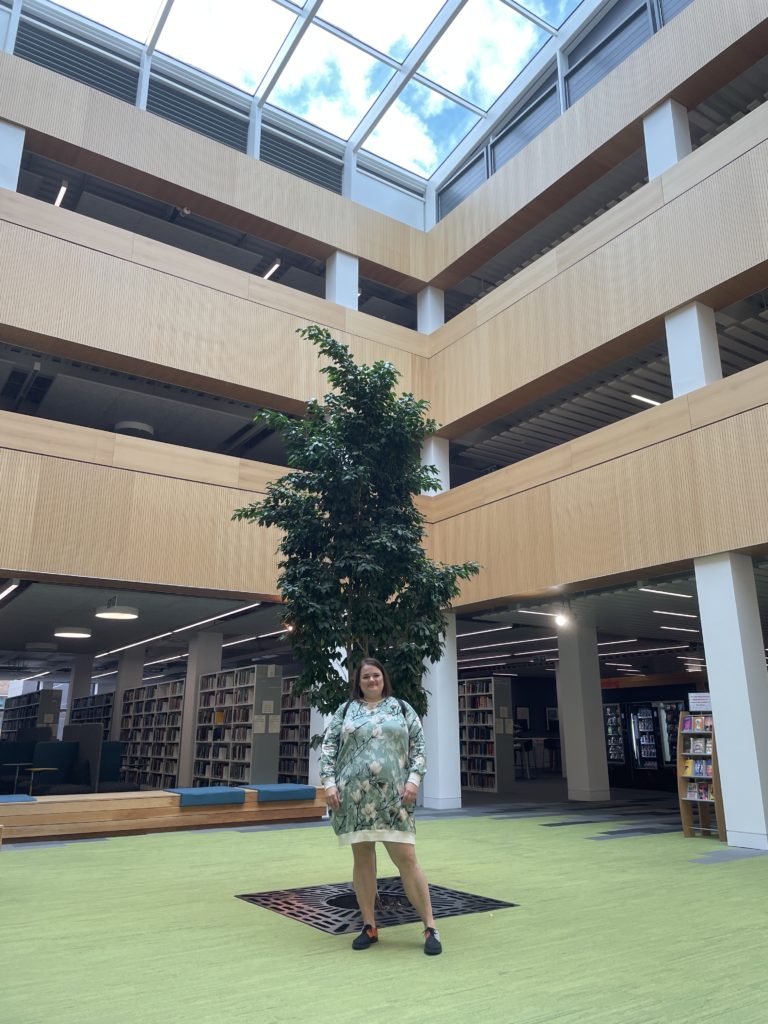 Karolina and Norma, the library tree, in the indoor courtyard. 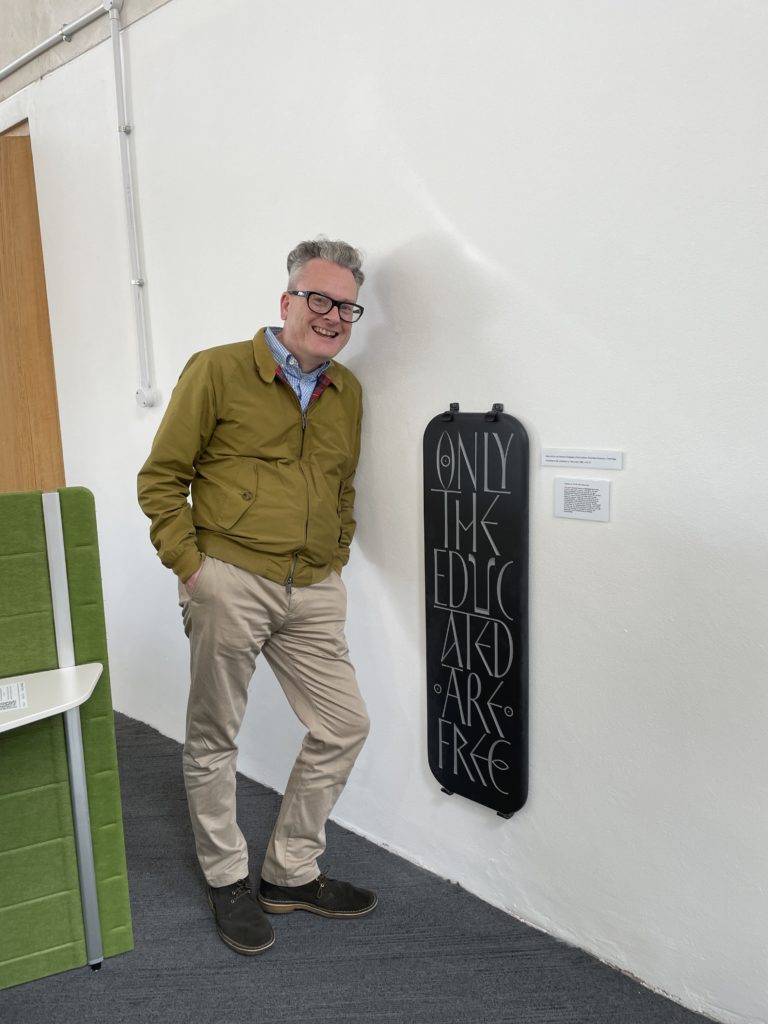 Inspirational library leader Andrew Barker by motivational sign in the reading room, ”Only the educated are free”.

Another place for silent studies is the main reading room, a room I really enjoyed because of the different type of desks and because of the amazing light in that room. It had a temple-like feel to it. To give you an impression of the library as a whole I also added some images from the third floor bridge below. The library is generally very spacious and very bright. I like that. It’s a bit like being in a Star Trek city in the future, you know the ones from TNG when it was still very utopian. 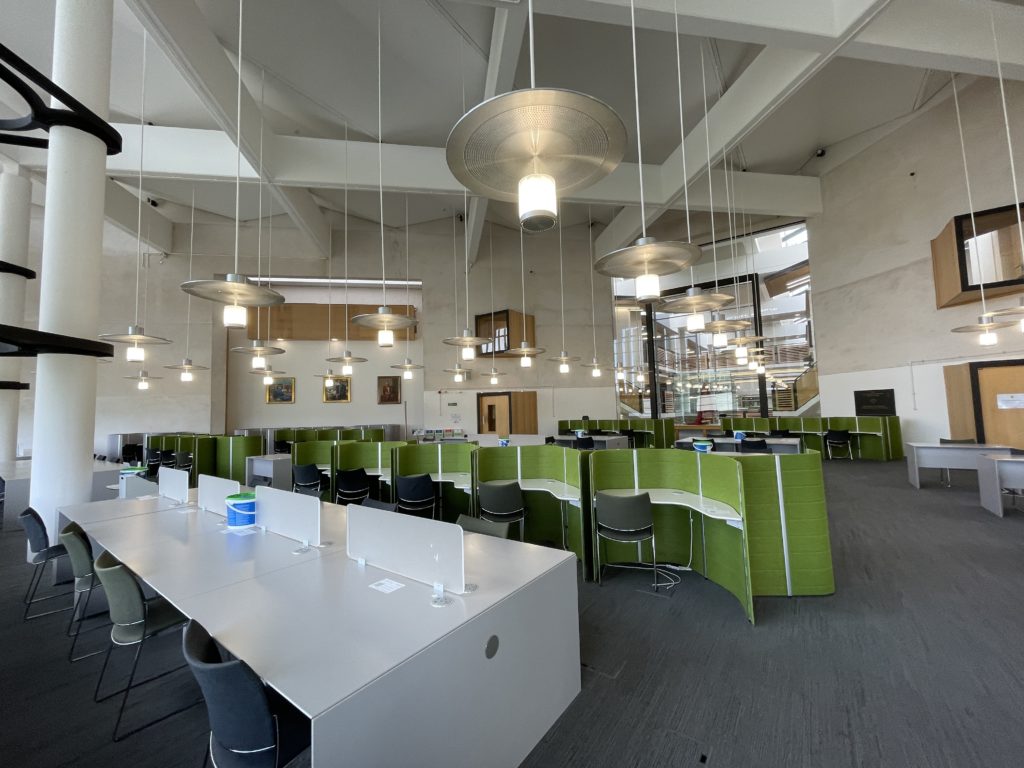 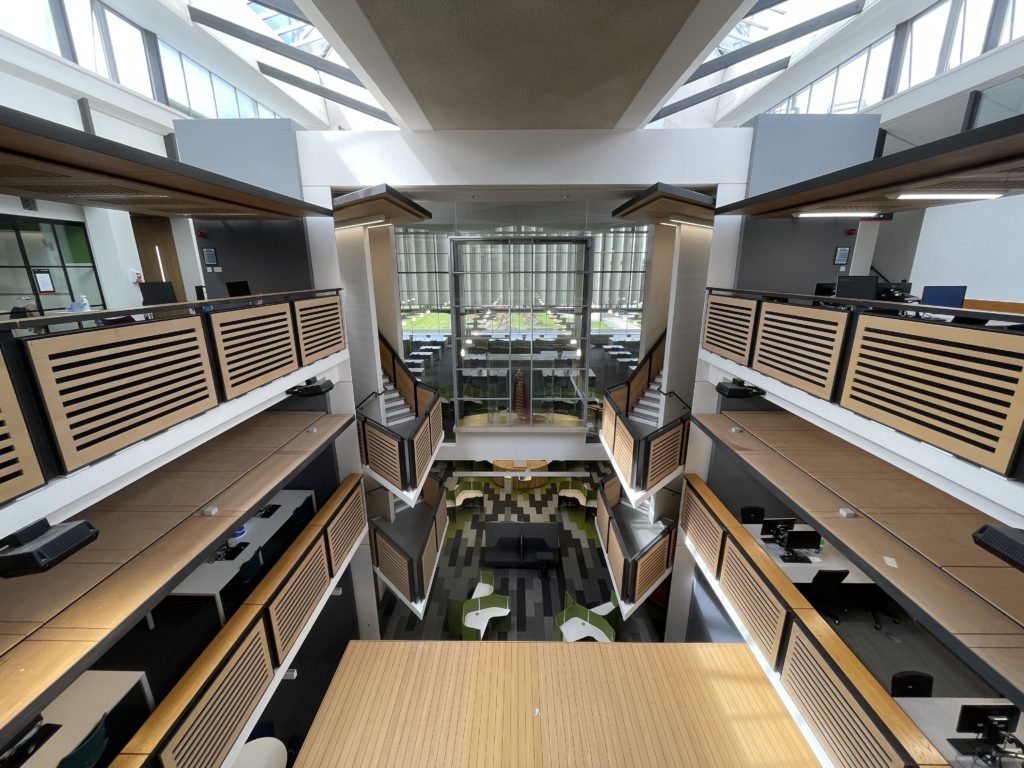 View from third floor towards the reading room. 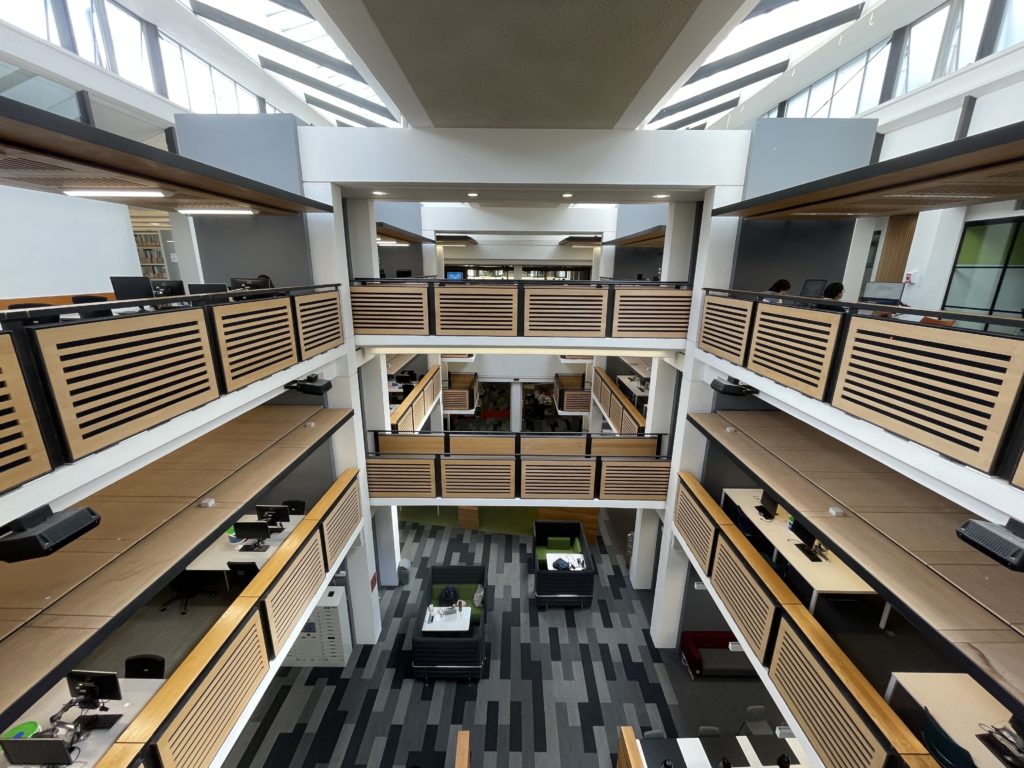 View from third floor towards the main entrance of the library.

We also looked at the space for postgraduates in the library which was currently being refurbished to better suit the needs and wants of the postgraduate students. It took me back to the time when I was active in the student union at Uppsala University and advocated for specific reading rooms and/or spaces for master students at the university library. There had been a decrease in the use of reading rooms at the library, partly because doctoral researchers over time had gotten better working conditions (such as salaries and offices), so one way to repurpose this reading rooms would’ve been to dedicate some spaces to students. However, specific spaces for master students were instead organised by the faculties and usually in leftover rooms in the campus buildings (mine was in a basement and we rarely went there), completely disregarding the potential synergies of an interdisciplinary research environment. I still don’t know why but I assume this was related to either money, prestige, or a siloed organisational structure (or possible all three). Either way, things hadn’t changed much when I came back to work as a librarian at the same university a few years later.

Looking at Swedish higher education statistics we do have steady increase of international students who come to Sweden to study at master programmes (97 % of the incoming freemovers were studying at a programme in 2020/21 – most of them at a master programme – compared to 80 % in 2013/14, and most students who pay tuition fees are in master programmes as well) so in one way it’s baffling that we’re not better at adapting our higher ed infrastructure (including libraries) to accommodate for this group. The post-Bologna master’s craze led to many new programmes but I feel we’ve missed something crucial in creating the best study environment for this group – both regarding spaces and events. This group would also be less involved in student politics, for several reasons, so it’s hard for (especially international) master students to efficiently advocate their interests. 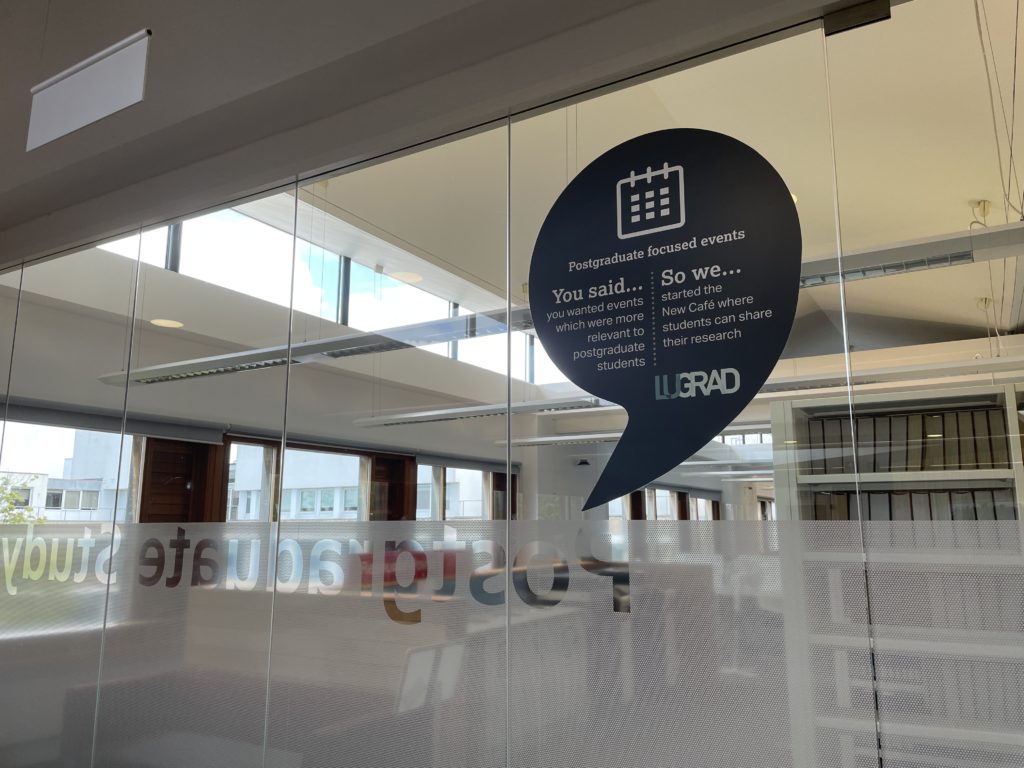 Involving and communicating with postgraduate students in the library. 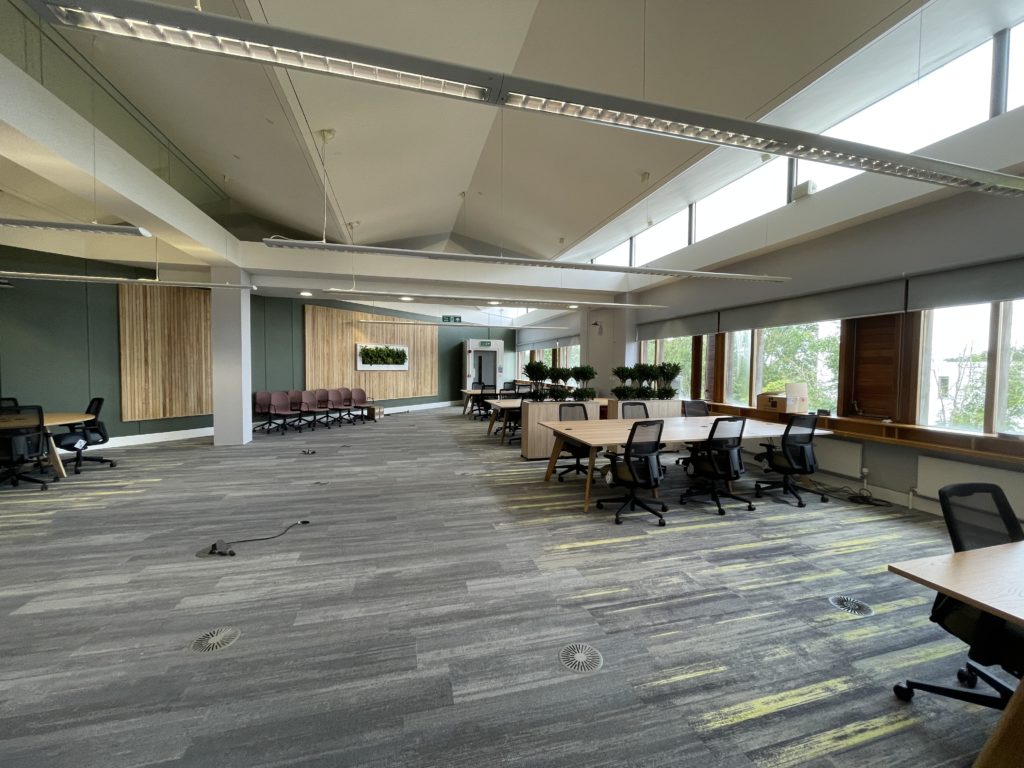 Space for postgraduate students in progress.

Anyway, comparing those experiences with the development of the postgrad spaces in Lancaster shows what a university and university library could be like, and how they could work with their users to make the best out of everything for everyone. However, the last I heard from my library (I’m on leave until 2024 for my doctoral research) didn’t make me super hopeful about a positive, student-friendly development during the next 10 years… ¯\_(ツ)_/¯ Maybe the student union needs another library focused student union party? (Yes, I was in one of those. It was started by the magnificent Moa Ekbom.)

Last but not least (there is really so much more to say about my visit to Lancaster University Library, so maybe I’ll add more to this post later on), a thing that really impressed me was the fiction collection which aimed to function a bit like a public library, a cultural living room, for the university students. Since the university is situated on a campus a bit out of town, and students tend to live on campus and spend a lot of time at the campus, it becomes a sort of small society in itself. It is therefore natural and necessary that the university library takes on a wider role for its community than, say, a university library within 10 minutes walking distance from a public library would do. The collection on the photo is meant to provide leisure reading for the students, and other activities and events at the library (such as the festival mentioned above) also bear witness to how the library consciously takes on this pivotal role. When Andrew explained this mindset I was very impressed by the fact that university library management could so astutely observe and act on their role in the wider scheme of things. Well done! 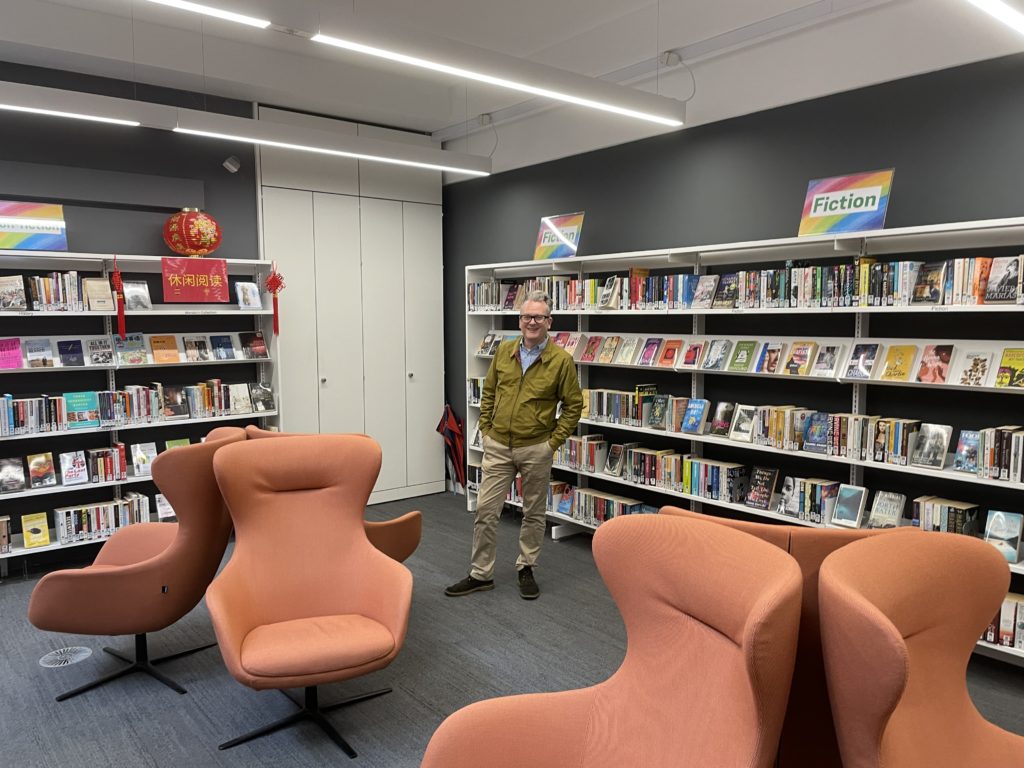 Leisure reading in the fiction collection and the library as a campus living room.